The sun is up…

While “leaves of three, let it be” may be well-known, less so—to humans anyway—are the berries of poison ivy. They stay on the vine long into the winter, a reliable food for birds in need even if still quite irritating to humans.

As our current—and inspiring—President reminded us, “the sun will come up tomorrow.” After a very gray yesterday, it has, in fact, come up this morning. To what I am not yet sure but I’m here, awake and ready to do what is needed to stand beside those who may be in danger, including Mother Earth.

Liz cleared the large wall she has in her studio yesterday. “An artist’s statement,” was all she said. Perhaps the old pieces no long fit in the same way. Perhaps creating space for what’s next, even if unseen. I trust her and continue to be inspired by her in so many ways. The world without these amazing women would not exist for long.

As I was emptying the dish drainer, I again took a long look at two spoons we have, the “knoepfle spoons.” The well-worn edge comes from Liz’s family having used them for years and years to cut dough out of the pan into boiling water to make this favorite German dish. While it is impossible to see the change in the shape of the spoon from one batch of knoepfles to another, it is easy to see how years can change the shape. 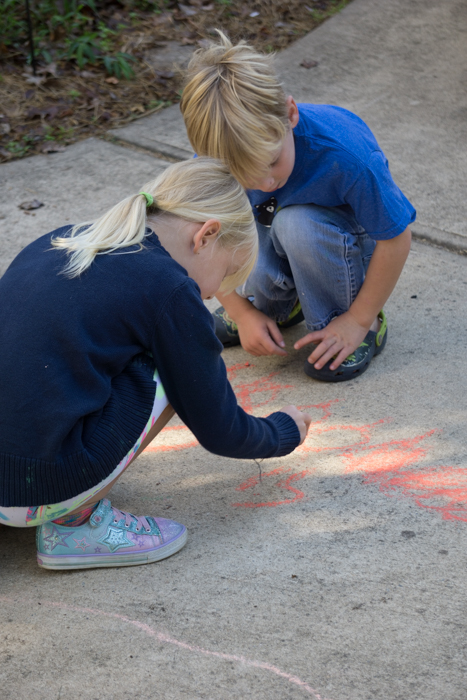 My granddaughter already modeling being a teacher to my grandson. What will they have learned from us when they are ready to vote?

I think this morning of our granddaughter who will be 11 if Trump serves a full term and 15 if we survive two of his terms as president. And of our daughter who has already endured too much of this world so brutally shaped for centuries too often by the hands of men.

And of my mother, sexually assaulted at age 10 but secreted in shame until she was 90. I think she would be horrified by our President-elect. And of how she always called November 11th “Armistice Day,” now called Veterans Day. She too was 7 years old when the Armistice marked the end of the fighting of WWI, the great “war to end all wars,” and she was 30 years old when the United States entered WWII. She could never speak of November 11th without great sadness in her voice, the sadness I think only a mother can feel for the horrible loss. I will think of her tomorrow and the many that have been lost so horribly in war and continue to think of her as we continue to deal with the insane saber-rattling of Congress in the years ahead.

Enough for now.The sun is up. Onward. Thank you for doing what you can to spread peace in the world for all.

The transitions of life can hold an unusual beauty as these leaves of American Beech so clearly show.