Among the most delightful moments we had watching birds in Botswana was seeing the commensal relationship between Southern Ground Hornbills and Southern Carmine Bee Eaters. We watched as two Hornbills grazed through dense 3-4 foot tall grass seeking their common diet of reptiles, frogs, snails, insects, and small mammals.

A pair of Southern Ground Hornbills graze across thick grassland.

As they moved slowly but surely across a field we noticed a half-dozen Bee Eaters swooping down from their perches and over the Hornbills. Over and over again the swooped snatching insects out of the air as they did so. 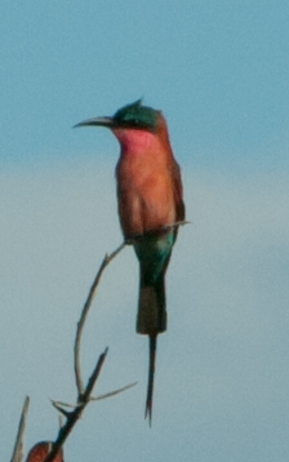 Our very knowledgeable guides—honestly we’d have been hopelessly lost without them—said the Hornbills stir up the insects from the thick grass. The insects then fly up into the air where the Bee Eaters grab them, return to their perch and devour them.

A Bee Eater swoops over the two Hornbills 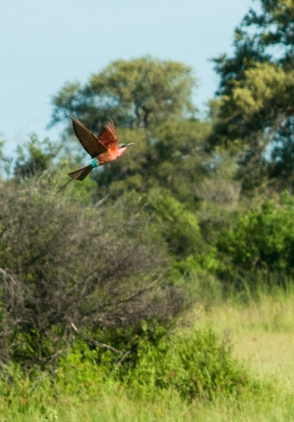 These agile birds quickly pick up insects raised by the Hornbills walking.

The “dance” was beautiful…

…and a fast-paced contrast of colors!

Back to the perch to wait for another opportunity.

The relationship certainly benefits the Bee Eaters. Reports indicate they also fly high over burning brush seeking insects that are raised by a fire. The Hornbill appears to not benefit from the Bee Eater’s behavior but it also appears to not be harmed—the fundamental definition of “commensalism.”

What a great time we had seeing these birds, watching their behaviors and learning more about the relationship between the two species. Just one more reason to go back to Botswana again!