Growing up in Michigan I’d see—actually usually hear—Sandhill Cranes most years but only in ones or twos or small groups during migration. The sounds they made haunted and intrigued, making me wish for more. More recently I’ve seen them in my father-in-law’s backyard, even quite close up as they spend the summer nearby. As you can see, they are stunning creatures, standing more than four feet tall.

When I knew my friend Rob and I were going to Colorado, I realized we’d be there about the time many Sandhill Cranes are congregating as they migrate south. A visit to Monte Vista National Wildlife Refuge proved very successful and we saw an estimated two thousand cranes coming in for the night. Pairs of birds and then rafts of several dozen at a time began coming in about an hour before dusk, all against the backdrop of the distant mountains. Although these still photographs don’t capture it, they were also calling to each other from on high in their remarkable and strange bugling calls. I’d recommend you click on the link to hear it while you view these photographs.

As daylight faded they came in even more heavily, and the setting sun provided  stunning color to make it all seem to come from a time before time began.

And then the new crescent moon revealed itself against the sunset, making this an evening I’ll long remember. I look forward to seeing—and hearing—more of these magnificent birds, either in Colorado or New Mexico where even more winter. 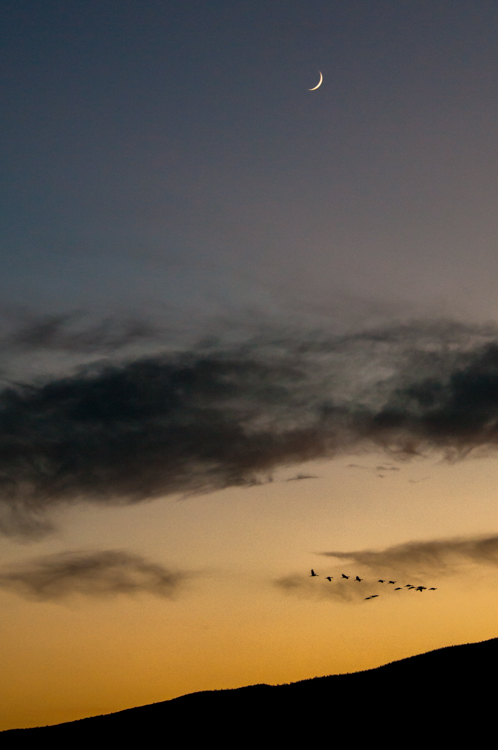