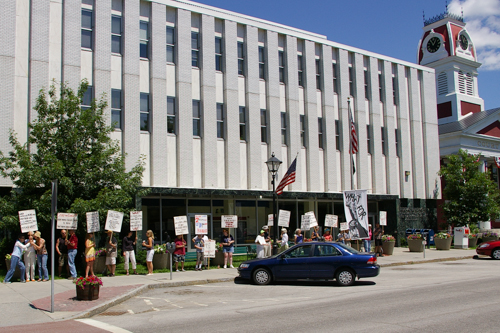 Today marks the day in 1945 the United States dropped an atomic bomb on Hiroshima, followed three days later by another being dropped on Nagasaki. More than 130,000 people were killed, half the day of the bombings. It remains the only time in history nuclear weapons have been used in war. While some will argue about whether or not the bombs shortened the war and saved lives, few will argue the day changed the world forever. The image above of the smoke rising from the bombing of Nagasaki is painful to view, even 70 years after.

Our Peace Line as seen in July 2008. Today we are typically a smaller group but the message remains the same: “War does not work.”

A small group of us stand in front of our local Federal building every Friday from noon to 1:00, as we have for most of the last 25 years, to remind ourselves and our friends and neighbors that war—in any form—has never worked to achieve peace. Many weeks our witnessing feels like only a token effort compared to the enormity of what seems an intractable reality but on this week of the year it is easy to remember why we are there.

Remembering Hiroshima is particularly important to me this year as we debate the merits of a political solution to the presence of nuclear weapons in the Middle East versus a military approach. My entire life has been spent in the grim shadow of the possible annihilation of life on Earth. Even long after the end of the Cold War, we remain insanely vulnerable with thousands of these monster weapons poised to be launched in ten minutes or less. A launch could happen either intentionally or accidentally—and serious weapons-related accidents do and have happened. The relatively simple step of decoupling warheads from weapons would immediately result in a much safer world and, perhaps, allow us to see that we can once and for all honor the people of Hiroshima and Nagasaki by saying “Never again!”

06 Aug This entry was published on August 6, 2015 at 6:19 am. It’s filed under John Snell, John Snell Photographer, Vermont and tagged Hiroshima, Middle East, Nagasaki, nuclear weapons, peace, war. Bookmark the permalink. Follow any comments here with the RSS feed for this post.

Older: Take me out to the ballgame
Newer: Black lives do matter

One thought on “Remembering Hiroshima, 70 years after…”