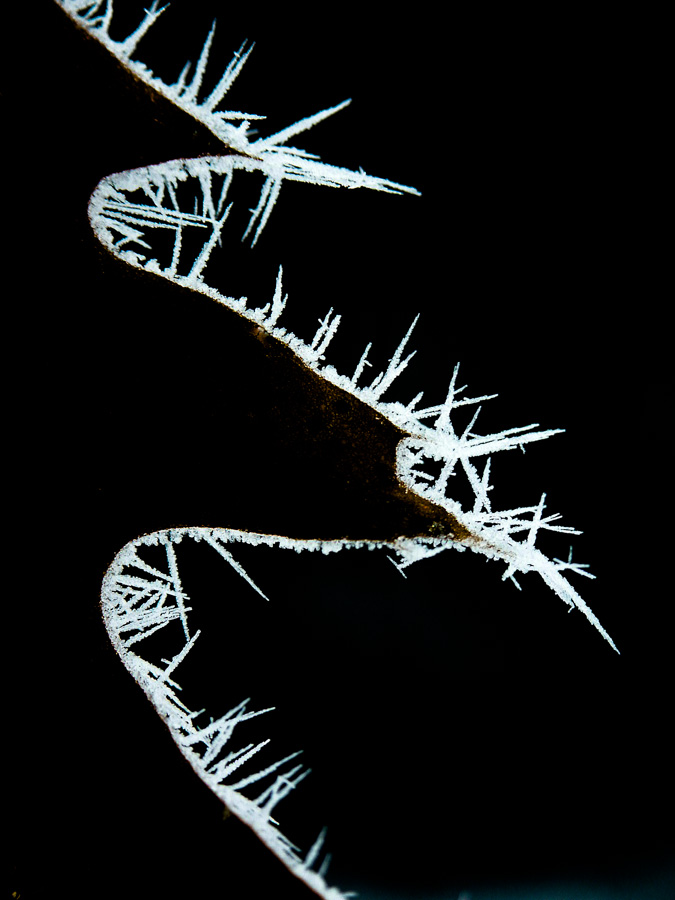 I have previously shown several of the photographs I’m planning on hanging in the Governor’s Gallery. I figure if I don’t tire of seeing a piece—and some I do—it is worth being considered to show again. One of my favorites is “Rime Frost on a Red Oak Leaf.” While this image stands on its own, I also love the story behind it. 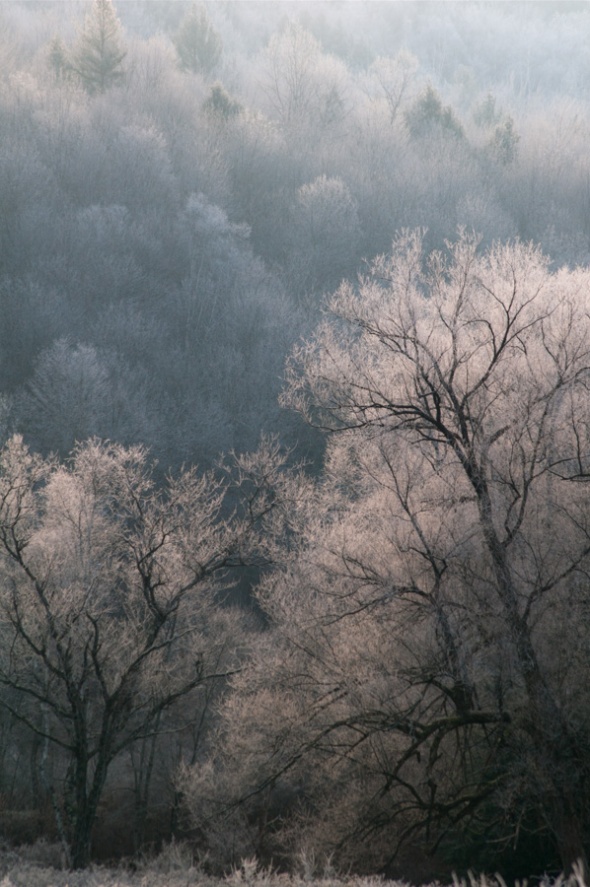 In 2002 I borrowed a digital camera to see if I was ready to leave film behind. Early one December morning I looked out to see the world covered in frost, something that happens only occasionally (clear night skies, high humidity, little wind and below freezing air temperatures) but when it does, much of the world ends up covered in delicate, lacy ice crystals. I’ve learned that on mornings like this I need to move quickly because as soon after the sun comes up, the frosty world melts back to a plain one. Several types of frost, most often a soft hoar frost (below), can form in these conditions. (See the wonderful website by scientist Kenneth Libbrecht for more on frost.)

Fans of lacy hoar frost stretch over the ice where needles of frost have formed directly on the ice surface.

The rime frost I found that morning high up in Hubbard Park had formed on the edges of the leaves, which are cooler, fed by a gentle wind delivering the moisture. I could look up at the park and see a band of this thicker frost covering whole areas and quickly headed up to explore more closely.

After several failed attempts at setting the tripod, getting use to the new camera and focusing on objects that were by then moving in the wind I succeeded in making two photographs—without exhaling and melting the frost! For both of these I adjusted the exposure so the leaves were underexposed leaving more detail in the frost.

Above is one of the photographs I made that morning, of rime frost on a pair of White Pine needles. I was working from a tripod less than twelve inches from the frost in a spot the sun had not yet touched. And below is the Red Oak leaf, a lovely expression of negative space rimed by the magic of frost.

So on that morning I left film behind and launched my life in digital photography and I also made a photograph I still enjoy seeing years later.

Older: A pair of glories
Newer: A new pair of photographs dazzles!

3 thoughts on “On the edge”